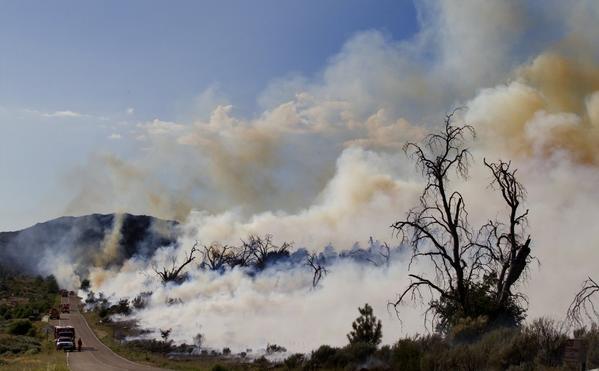 Wildfires such as the Yarnell Hill blaze in Arizona may be warming Earth’s atmosphere far more than previously thought, according to a study by Los Alamos National Laboratory.

Researchers at the Department of Energy facility normally chase fires throughout the western U.S., to measure their atmospheric effects. But in 2011, they took advantage of a conflagration that came to their doorstep – the Las Conchas fire that burned more than 150,000 acres and briefly caused the evacuation of the sprawling facility in the New Mexico desert.

“This was just an opportunity in our backyard,” said Manvendra Dubey, a senior atmospheric scientist at the laboratory. “It was a freebie for me, so I couldn’t miss that opportunity.”

After the brief evacuation ended, Dubey’s team set up monitoring devices while the fire continued to rage across the desert scrubland. Their analysis, which included painstaking counting and classification of thousands of particles, revealed components that had not been considered in climate models, most of which have suggested that cooling and warming effects of two kinds of aerosols tended to cancel each other out.

The Los Alamos team identified tar balls – spherical, carbon-based particles – that are 10 times more prevalent than soot particles, and can boost the heating effect of wildfire emissions, according to the study, published last week in the journal Nature Communications.

“We provided the data that shows that current estimates, which are close to zero or show a very slight warming, are incorrect and the warming will be higher,” Dubey said. “We are confident this will change the results and show that fire emissions will have a tendency to warm.”

Close examination of soot also showed these particles were sheathed by organic coatings that “act like a lens to focus sunlight and amplify the sunlight that soot absorbs,” Dubey said.

Wildfires have increased in number, intensity and acreage throughout the southwestern U.S. over the last three decades, driven by climate change and forest management decisions to suppress fires instead of letting them take their natural course. That burning biomass pumps tons of aerosols into the atmosphere, directly changing how sunlight is absorbed, and indirectly affecting the process by influencing cloud formation.

“For a given amount of water vapor in the atmosphere, you could be condensing the water in many, many more small particles. So clouds could become brighter,” Dubey said. “These tar balls can get embedded, and soot can get embedded in clouds, and the clouds can then absorb more sunlight and evaporate faster.”

Climate scientists generally focus on the effects of two aerosols: soot, or black carbon, and smoke, known as organic carbon. Smoke tends to scatter solar radiation, for a net cooling effect. But black carbon absorbs it. Research in the last decade has increasingly suggested that black carbon may be the second strongest contributor to atmospheric warming, behind carbon dioxide, the most well-known greenhouse gas.

IMAGE: Firefighters work along Sunrise Highway in Mount Laguna, Calif., Monday, July 8, 2013, where they set off a back burn on the east side of the highway. The wildfire reportedly burned more than 100 cabins at a mountain camp east of San Diego. (Nelvin C. Cepeda / Associated Press / July 9, 2013)